And then there were two.

That is, just two FAANG stocks are left to report this earnings season — Apple next week and Amazon.com after today’s close. With gloom swamping techs after that “Winter-Is-Coming” forecast from Facebook, Jeff Bezos & Co. may be feeling pressure to deliver:

Thoughts go out to all the $AMZN bulls, if this dont blow out on earnings it probably gets smashed like $FB as the chart of #AMZN is crazy pic.twitter.com/X3Whyfrd7v

Facebook could see $100 billion wiped off its market cap, if buyers don’t start to smell a bargain. That’s equal to three Twitters.

It’s “bigger than Berkshire, but in terms of longevity, this is the type of structured company and the type of talent that could become Berkshire over the next 25 years,” said Brown, in a discussion posted on YouTube with Irrelevant Investor’s Michael Batnick, his Ritholtz Wealth Management colleague.

“When Alphabet set itself up as a holding company to own Google, in addition to channeling the profits from Google into other bets and other ventures, they were not doing this surreptitiously,” said Brown.

“They were openly acknowledging, ‘This is our bid to do something Berkshire-esque.”

And he said it makes total sense that the next Berkshire-type company will come from a sector that isn’t finance or insurance.

“To me it’s going to be a technology company that is not afraid,” Brown said. Other Alpha-pluses: Shares don’t look to expensive compared with other tech names, and it’s got built-in fiscal discipline via CFO Ruth Porat, who hails from Morgan Stanley. And in the company’s latest quarterly report, Alphabet posted extra profit owing to its investments.

“It’s not like they’re just throwing Hail Marys, they’re making investments in smaller Silicon Valley things that are paying off, and they’re doing this overseas as well,” Brown said.

The call comes with caveats: “They could end up making a bet that sinks the company, or Siri and Alexa could steal all of their thunder — if search becomes voice-only and Google Assistant never catches up.”

See the Market Snapshot column for the latest action. 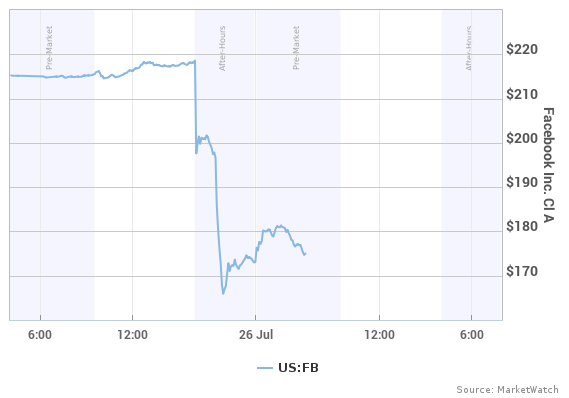 Is it the beginning of the end for the tech superstars that have been powering the stock market?

JonesTrading’s Michael O’Rourke seems to think so, as he reflects on Facebook’s premarket dive that is shown in the chart above.

“We have continually expressed concern about such narrow large-cap leadership, especially in the names where valuation is not a consideration,” he said, as he predicted (rightly by the looks of it in premarket) that Amazon will sell off into its earnings release.

On the bright side, there are a bunch of other big companies out there that have been reporting good numbers and deserve some love. “These events create the perfect opportunity for the next rotation into the broader market,” said O’Rourke, who shared the chart below. 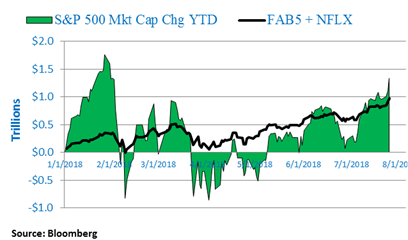 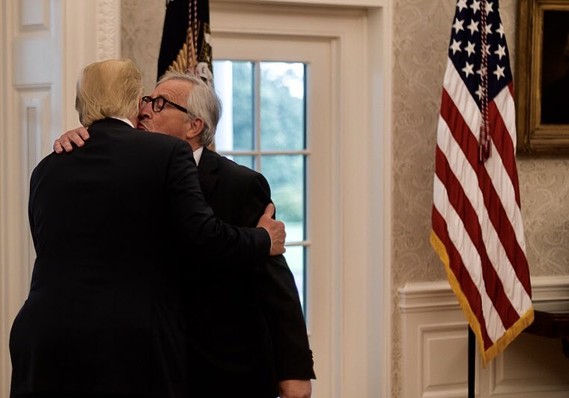 “Obviously the European Union, as represented by @JunckerEU and the United States, as represented by yours truly, love each other!” — That was a tweet from POTUS referring to his upbeat meeting with European Commission President Jean-Claude Juncker.

He included a kissy photo, though that EU-U.S. trade deal that was short on specifics, so we’ll see if love stays in the air.

$904 billion — That’s where Amazon’s market cap finished at yesterday’s close, marking the first time it has finished above the $900 billion level, according to the WSJ Market Data Group. Shares will need a 11% bump to reach the $1 trillion market-cap milestone.

Facebook FB, +1.32% is looking at a near 20% drop at the open, with the bulk of the worries coming after CFO David Wehner disclosed that the social-media giant expects its revenue-growth slowdown to continue. It also missed expectations on sales and reported slower user growth.

Read: Facebook pays for all its mistakes at once, and it is a big bill

Snapchat parent Snap SNAP, +1.90%  is down in the wake of those earnings, too.

PayPal PYPL, -0.04%  is also taking a hit this morning after a third-quarter outlook miss, though Chief Operating Officer Bill Ready says investors are “misunderstanding” its guidance.

Qualcomm QCOM, +0.97% says Apple AAPL, +0.94%  will only use Intel modems in its next iPhone. But shares are up after an earnings beat and news it will drop plans to acquire NXP Semiconductors NXPI, -2.27%  .

On the political beat, House conservatives took a step toward removing Deputy Attorney General Rod Rosenstein from office, filing articles of impeachment against him.

Man detonates explosive at U.S. Embassy in Beijing, injuring only himself

Greek minister, residents square off over blame for deadly fires

Need to Know starts early and is updated until the opening bell, but sign up here to get it delivered once to your email box. Be sure to check the Need to Know item. The emailed version will be sent out at about 7:30 a.m. Eastern.