The question now is whether the Dow will come out on top once again in 2023. And if so, what impact would that have on the stock market and your investment portfolio? 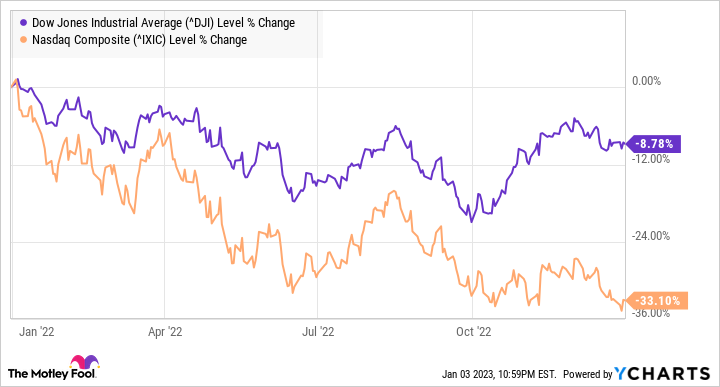 Composition of the Dow versus the Nasdaq

The Dow is the oldest stock market index, but it has a major flaw — it’s price-weighted. That means the index weights are determined by stock price, not market cap.

By contrast, the S&P 500 and the Nasdaq Composite are market-cap weighted. That means the largest companies — like Apple and Microsoft — make up the biggest names in those indexes.

The top 10 largest Dow stocks make up 55.9% of the index, and a big run-up in a stock’s price (or a decline) can drastically change the dynamic of the Dow.

UnitedHealth stock is up about 135% in the last five years, a big move for a stodgy blue-chip dividend stock. The move has pole-vaulted UnitedHealth to the No. 1 holding, comprising over 10% of index weight.

Apple stock has done even better than UnitedHealth, up over 190% in the last five years. But because Apple completed a 4-for-1 stock split in Aug. 2020, it doesn’t even crack the top 10 Dow holdings. If it hadn’t completed the split, the stock price would be around $500 per share, just under UnitedHealth for the second-largest holding in the Dow.

The wonky structure of the Dow makes minor events like stock splits or the arbitrary nature of a stock’s price meaningful.

Meanwhile, the top 10 components of the Nasdaq Composite make up 47.3% of the index with Apple, Microsoft, Amazon, and Alphabet making up 36.4% of the index.

However, the other half or so of the index consists of over 3,600 companies, so there’s a lot more diversity within the Nasdaq than the Dow.

It also may surprise investors that the Nasdaq is chock full of non-tech companies. For example, Amazon and Tesla are actually considered consumer-discretionary stocks, while Alphabet and Meta Platforms fall under the communications sector. Pepsi and Costco are both consumer staples. In some ways, the Nasdaq does a much better job representing the broader economy than the Dow. 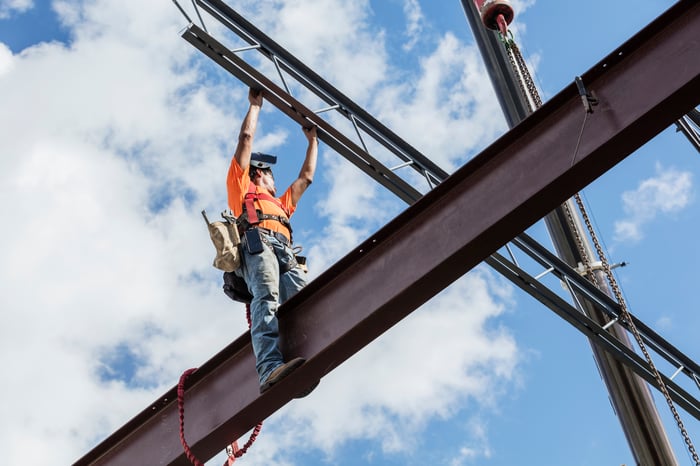 Risk-averse investors would do well to consider some top Dow stocks because of their reliability and track records for persevering through economic cycles. On the other hand, risk-tolerant investors may be better off sticking with higher-risk, potentially higher-reward growth stocks.

For everyone in between, it may be helpful to ask yourself: Do you think UnitedHealth, Goldman Sachs, Home Depot, and Amgen are going to outperform Apple, Microsoft, Alphabet, and Amazon over the next five-plus years? Or are investors just driving up the prices of safe stocks like UnitedHealth in the short term?

There are a few Dow stocks that are worth avoiding or even selling at this point. It’s hard to justify UnitedHealth, Coca-Cola, and McDonald’s having higher P/E ratios than Apple, Microsoft, and Alphabet, but they do. And that’s a cause for concern if the Dow is going to beat the Nasdaq for much longer.

The Dow could very well beat the Nasdaq again in 2023 if investors continue fleeing to safe, dividend-paying companies with moderate valuations instead of growth stocks (27 of the 30 Dow components pay dividends). But over time, it’s hard to see the Dow coming out on top.

You could even argue the purpose of the Dow isn’t even to beat the Nasdaq or S&P 500. Rather, the Dow is meant to act as a barometer of the old and new economy. And to its credit, it does a good job providing a safe haven for capital preservation and passive income. In contrast, the Nasdaq Composite is more focused on capital appreciation, and many components don’t pay sizable dividends.

Ultimately, investors have to consider the weaker growth prospects for companies in the Dow relative to those in the Nasdaq, plus the inflated valuations of many major Dow components right now. Anyone who can tolerate a little more risk and who’s looking to add to their investment portfolio is better off focusing on Nasdaq stocks with a few Dow names sprinkled in too.