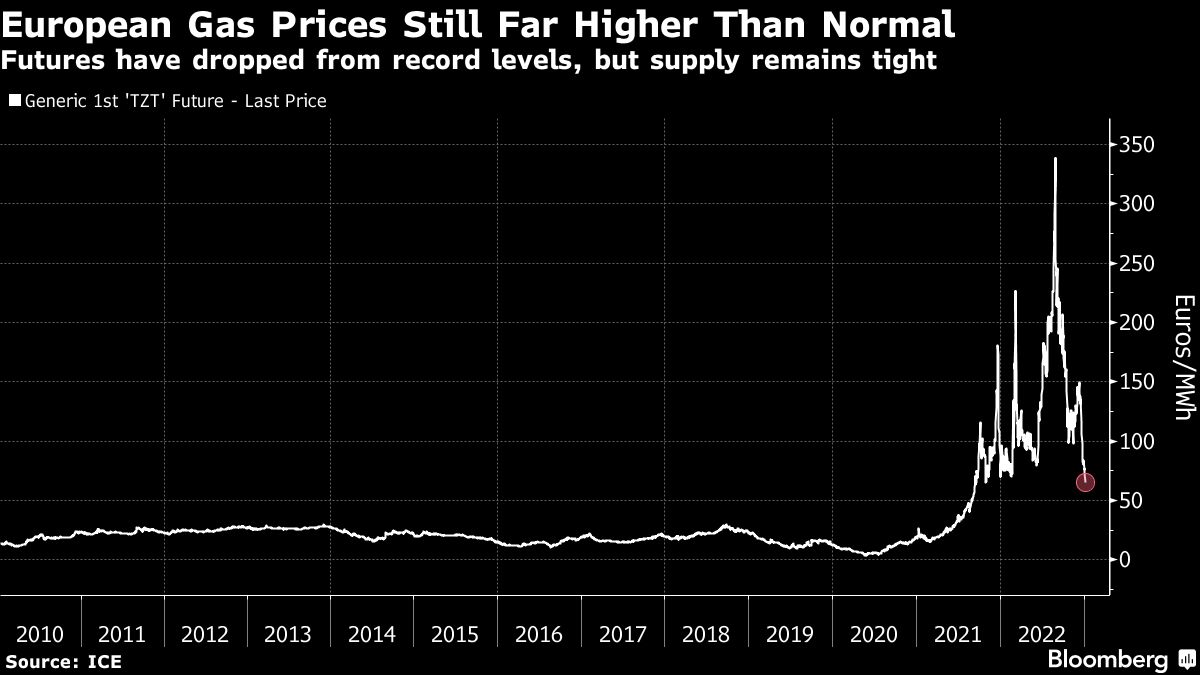 (Bloomberg) — Commodities burst into Monday in an upbeat mood, with crude to copper rising amid growing optimism over Chinese demand. US inflation figures and a speech by Fed Chair Jerome Powell top this week’s diary as investors mull where raw materials are headed after a volatile start to 2023.

Most Read from Bloomberg

The US data on Thursday will feed into the Federal Reserve’s next steps on rates — perhaps the biggest swing factor for global commodities besides the pace of China’s post-Covid recovery. Also on the watch-list: the latest US government takes on crops and energy markets, China’s December trade figures, and falling natural gas prices across the world.

China’s first quarter will be terrible for commodities demand as Covid-19 and the Lunar New Year holidays suppress activity. What happens beyond that is much less certain. Those counting on a second-half recovery got a boost Friday after Bloomberg News reported plans to ease the “three red lines” for property debt that have driven the sector’s prolonged slump. A top central-bank official said the economy will return to “normal” soon.

In the short term, investors, especially in oil, will scrutinize indicators from air travel to traffic congestion for clues on the path back to normalization after the virus wave. Trade and credit figures due this week will also offer a snapshot of the disruptions wrought by the abrupt pivot from Covid Zero. China’s full-year economic data including GDP growth and steel output is coming out next week on Jan. 17.

Gold is enjoying a lustrous start to 2023. Prices touched their highest in more than eight months Monday as the dollar extended losses. Any fresh data or commentary that bolsters expectations of a less aggressive Fed is helping bullion at this point, and could easily push prices past $1,900 an ounce for the first time since last May.

But the positivity could be challenged if Fed Chair Jerome Powell steps up warnings against complacency when he speaks at a Stockholm monetary conference on Tuesday. More importantly, a higher-than-expected CPI reading on Thursday will spook markets growing comfortable with the narrative of slowing rate hikes.

Crude greeted the new year with a chunky decline as lackluster demand and China’s virus turbulence left the market plentifully supplied. Sentiment in January will be dominated by events in Asia’s biggest economy, and on the supply front by the fate of Russian exports after sanctions. OPEC+ has plenty time before its next early-February meeting to monitor developments.

Saudi Arabia has shown a firm commitment to large supply cutbacks announced by the alliance last year, and insist the group will be “pre-emptive” in keeping global markets in equilibrium. Crude’s faltering performance so far is likely to keep OPEC+ on high alert. In the diary, the US Energy Information Administration offers its first monthly report of 2023 on Tuesday, with projections from the International Energy Agency and OPEC due next week.

Natural gas futures around the world are plummeting on the unseasonably warm start to winter, and prices could fall further as weaker demand eases fears of energy shortages. That has big implications for Europe’s economy, and it’s bad news for Russian President Vladimir Putin’s push to pressure European leaders by weaponizing energy.

New seasonal high temperatures were registered in several European countries over the past week, while milder temperatures are forecast from the US to Japan through mid-January. Still, the energy crisis isn’t over. While European gas prices are at the lowest level since 2021, they are still three times higher than the 10-year average through 2020. Fuel supply is slated to remain tight for years as there is little new production coming online.

The US Department of Agriculture’s monthly WASDE crop report in January is one of the agency’s biggest data drops of the year. The Jan. 12 report will offer the first look at how much wheat was planted last autumn and how much grain and soy was on hand as of Dec. 1. Traders will be bracing for surprises, with global grain supplies still tight due to the war in Europe and patches of drought.

Agricultural powerhouse Brazil will also release its latest estimates for grains and oilseed production on Jan. 12, giving the market insights on the outlook for the world’s top soybean producer following a slow seasonal start. Still, Brazil’s soybean and corn production is expected to be at an all-time high despite drought and heat affecting yields in the nation’s far south. Dryness in South America has been a bullish factor for soybean contracts and updates on the Brazilian crop may set the tone for trading early this year.

Most Read from Bloomberg Businessweek