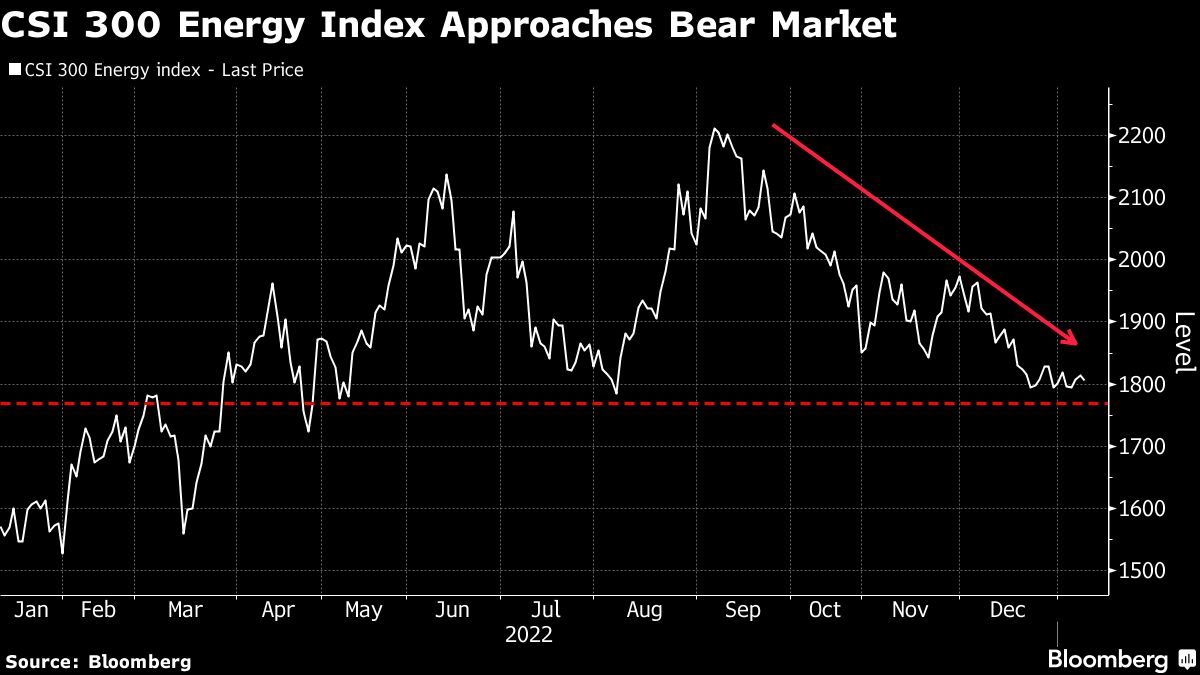 (Bloomberg) — Chinese energy stocks are losing out on a huge reopening rally, inching toward a bear market amid the government’s coal price controls and an uncertain demand outlook.

Most Read from Bloomberg

The CSI 300 Energy Index has fallen 18% from its Sept. 6 peak, nearing a 20% slide that that would push the gauge into bear territory. Coal miners China Coal Energy Co. and Yankuang Energy Group Co. have fallen the most, losing at least 24% each during the period.

The slump contrasts with an epic bounce across other Chinese assets, which have been buoyed by a swift reopening from Covid Zero. Miners have yet to reap the benefit as the economy remains sluggish, and face pressure to sell more coal on long-term contracts at regulated prices. A potential end on a ban on Australian coal imports is another uncertainty.

A resumption of coal imports from Australia has the potential to “further depress China coal shares,” said Steven Leung, an executive director at UOB Kay Hian (Hong Kong) Ltd. The energy sector overall “needs some recovery in economic numbers to trigger” a rally in its shares, he added.

While the reopening will eventually revive demand for coal, the outlook remains unclear for now amid a slow and patchy economic recovery, while milder weather will also reduce heating requirements.

With the energy gauge an exception, all sub-indexes of the benchmark CSI 300 have risen since Oct. 31, spurred by President Xi Jinping’s policy pivot on Covid and a raft of pro-growth measures. The CSI 300 has gained 14% since then, while a MSCI gauge of Chinese shares in Hong Kong has jumped more than 46%.

The biggest loser in China’s energy gauge is Yankuang Energy, which has lost nearly 40% of its value since a September peak, battered also by a failed takeover of Yancoal Australia.

Most Read from Bloomberg Businessweek