Shares of Carnival (CCL 2.94%) have tumbled over the last year due largely to a combination of a sluggish recovery from the pandemic, wide losses, high debt, and macroeconomic headwinds.

According to data from S&P Global Market Intelligence, the stock has fallen by 62% since the S&P 500 peaked on Jan. 3, 2022. As the chart below illustrates, the stock fell sharply last spring and has stayed down since then. 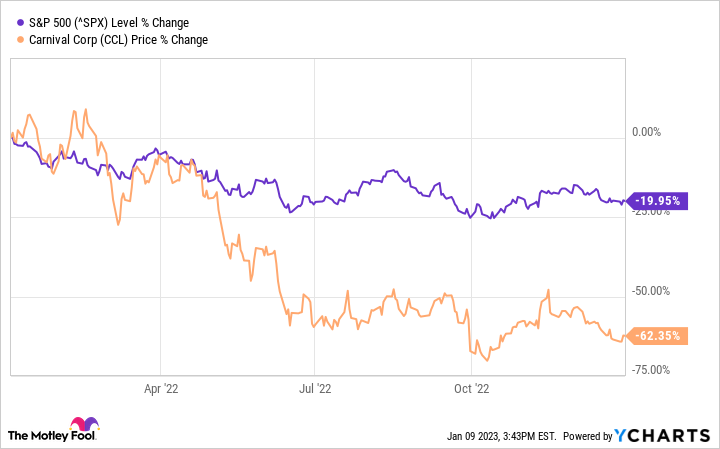 Could the cruise line operator’s shares make a comeback in 2023?

All cruises were put on hold in the early stages of the pandemic, and while those ships have now resumed sailing, operators including Carnival, the world’s biggest cruise line operator, have struggled to recover from their extended pause.

In its fiscal fourth-quarter earnings report, which came out in December, Carnival reported positive trends in occupancy and bookings, but still had a GAAP net loss of $1.6 billion, or $1.1 billion on an adjusted basis. It also reported negative free cash flow of $1.3 billion for the period, which ended Nov. 30.

While the company reached an 85% occupancy rate in the fiscal fourth quarter and revenue per passenger cruise day was above 2019 levels, the wide loss reflects that the company is struggling with higher costs, including higher fuel costs.

Management said pricing trends were favorable going into 2023, and that its advanced booked position — reservations for future cruises — is at a higher level than it averaged historically, and at average prices higher than before the pandemic.

However, the company still faces a significant challenge due to its debt burden, which is now at $34 billion. The company spent $448 million covering its interest expenses in fiscal Q4. That’s an annual run rate of $1.8 billion. Even if the company reached its pre-pandemic peak in operating income, those interest expenses would wipe out half of its profits.

Finally, given the rapid increases in interest rates over the last year, it’s likely that the company’s interest payments will increase as it rolls over its debt and is forced to refinance it at higher rates.

Compared to historical levels, Carnival stock looks cheap, but the prospects of a recession seem to be weighing on the cruise line stock right now. While its ship occupancy should eventually return to pre-pandemic levels, its increased debt burden will weigh on the stock.

Given the negative market sentiment and forecasts of a recession this year, this stock is unlikely to turn around until investors believe the worst of the potential economic downturn has passed.