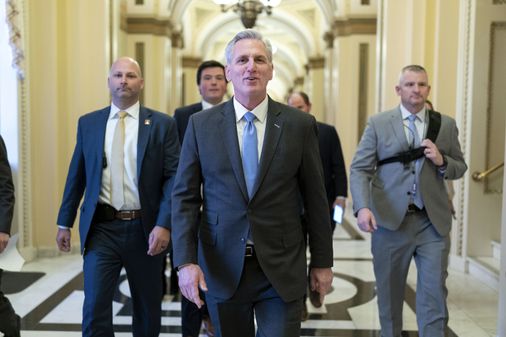 “I think the the economy’s going to struggle this year, but we have a fighting chance to avoid a downturn, assuming we don’t make a big mistake, like breaching the debt limit or even threatening to breach the debt limit,” said Mark Zandi, chief economist at Moody’s Analytics, an economics research and consulting firm. “The dysfunction in Washington is a very, very serious threat to the economy and our ability to avoid a recession in 2023.”

Get Today in Politics

A digest of the top political stories from the Globe, sent to your inbox Monday-Friday.

The table is already being set for a high-stakes clash.

One of the concessions McCarthy made to win the speaker’s gavel was to use the need to raise the debt limit to force Democrats to agree to federal spending cuts. House Republicans have loudly complained about the rising national debt under President Biden, although they were largely silent as it shot up during the Trump administration.

“I’ve never voted for a debt ceiling increase, and I won’t unless it’s paired with meaningful reform,” Representative Mike Gallagher, a Wisconsin Republican, said last week. Former president Donald Trump egged on Republicans this week, writing on Truth Social that they should be “playing tough in the upcoming debt ceiling negotiations.”

That’s got Democrats worried. While there is bipartisan agreement that the rising debt needs to be addressed, the White House has said Biden won’t negotiate over raising the debt limit, which is required to pay for spending already authorized by Congress.

“There will be no hostage-taking,” White House press secretary Karine Jean-Pierre said this week. “The full faith and credit of our country is too important to allow any of that, because to default would be to force extraordinary costs on the American economy and American families.”

Biden knows the damage a debt limit standoff can cause. He was vice president in 2011 when House Republicans under speaker John Boehner, fresh off winning control of the chamber after four years in the minority, balked at increasing the limit until the last minute during the Obama administration.

“It was terrifying, and the terror came from not being sure that Speaker Boehner had the ability to control his caucus,” said Harvard economist Jason Furman, who was a top White House economic official at the time. “The debt limit is just an existential threat to the US economy.”

Boehner had about a 50-seat majority in the House. McCarthy has only a four-seat majority, giving him much less flexibility to make a debt limit deal with Biden and the Democrats.

In 2011, the delay in raising the limit caused major stock indexes and consumer confidence to tumble. Standard & Poor’s downgraded the US government’s AAA credit rating for the first time, and the higher interest rates that followed led to $1.3 billion in additional federal borrowing costs that year alone, according to the Government Accountability Office.

Another standoff could lead the other major credit rating companies, Fitch Ratings and Moody’s Investor Services, to downgrade their AAA ratings on US government debt.

“What we saw just a few days ago with the speakership . . . kind of bodes poorly for the outcome going forward,” said Richard Francis, a senior director at Fitch Ratings and its primary analyst for the United States. “If the government were not able to raise the debt ceiling in a timely manner, that certainly could lead to a negative rating action.”

Democrats and Republicans have always managed to strike a debt-limit deal before the government maxes out its ability to borrow money to pay all its bills.

Technically, the country will hit that limit in the next few weeks, said Shai Akabas, director of economic policy at the centrist Bipartisan Policy Center think tank, which closely tracks the debt limit. But the Treasury Department then can juggle its finances to buy several more months before the nation reaches the so-called X-date, when it no longer can pay all its obligations without increasing its debt limit. That will probably happen this summer, Akabas said.

Going beyond that date is the fiscal doomsday scenario.

Without the ability to borrow, the federal government would have to rely solely on incoming tax revenue and could only pay some of its bills. Some Republicans have argued the government could prioritize who gets paid to make sure Social Security recipients receive their monthly checks. But experts said that might not be possible given complex federal payment systems.

In any case, the government soon would default on some of its obligations, most likely including holders of Treasury bonds, shaking the confidence of investors.

A 2021 simulation by Moody’s of an extended default found that the economy would fall into a deep recession, with nearly 6 million lost jobs and stock prices falling by almost a third. Even if the crisis were resolved quickly, Zandi said, Americans would pay for the default for generations because of the higher interest rates investors would demand to offset the risk that it could happen again.

The US economy has weathered a series of shocks since the pandemic struck in 2020: a severe two-month recession, global supply chain problems, soaring inflation, and the fallout from Russia’s invasion of Ukraine. The Federal Reserve has been aggressively raising interest rates to try to push down inflation, slowing economic growth to the point that many economists already were forecasting a more than 50 percent chance of a mild recession this year.

A debt limit fight would only increase that probability, experts said.

Since the 2011 standoff, Republicans have threatened a repeat on several occasions but always backed off. Financial markets aren’t worried right now, but this time could be different, said Greg Valliere, chief US policy strategist for AGF, an asset management firm based in Toronto.

“I think what we saw in the House last week was eye-opening and unnerving and I think there’s a real threat that this could become a major crisis,” said Valliere, who is based in Washington and has followed US fiscal policy for decades. “Sadly it might take an angry reaction from the markets to get Congress to back off on a default scenario. Put me down as increasingly worried about a crisis beginning this summer on a possible default.”