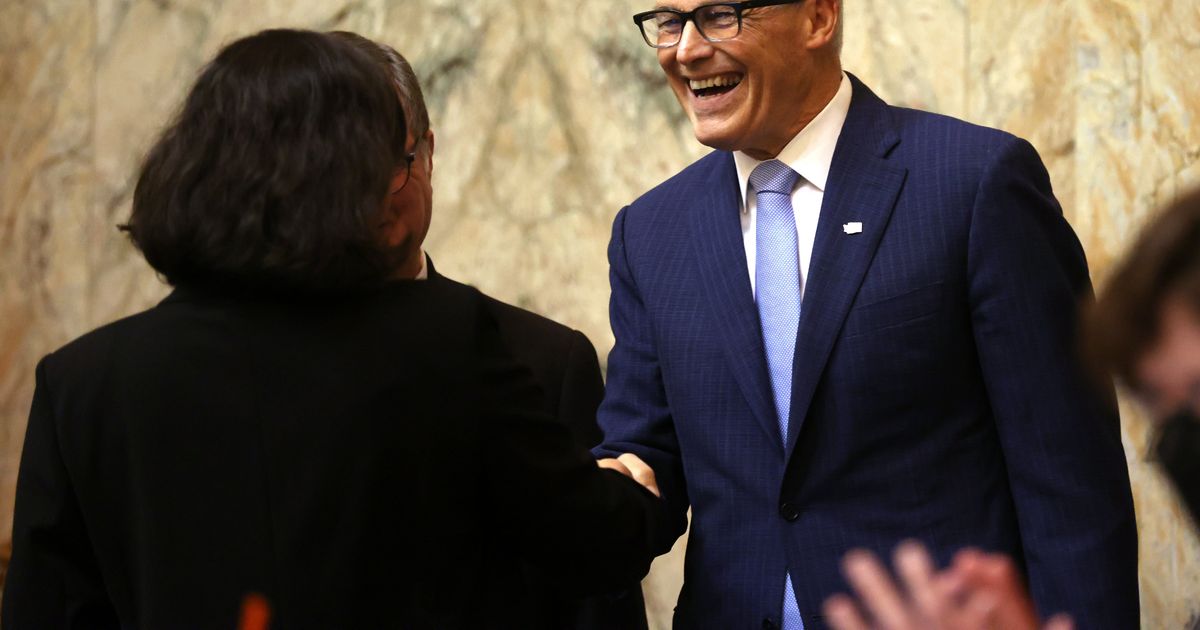 Inslee on Tuesday delivered his first in-person State of the State address since 2020 to members of House of Representatives and Senate, all statewide elected officials, the state Supreme Court and a number of guests.

After three years of remote work, the packed chamber was “a glorious site” to Lt. Gov. Denny Heck, who presided over the joint session.

Since his last in-person State of the State, Inslee said Washington has emerged from two threats: to personal health and to democracy itself.

“So, now, it is our blessed opportunity to fully exercise the power of democracy, not with half measures, empty gestures or platitudes, but with the boldness and ambition that is fitting to the unlimited capacity of our Evergreen State,” Inslee said.

Along with housing and behavioral health, Inslee touched on the importance of addressing climate change, gun safety and abortion access this session.

He also noted several accomplishments from the past two years, including funding new supportive housing programs, passing climate policies that seek to lower carbon emissions from fuel and other polluters, implementing a tax credit for working families, and expanding broadband access.

Following Inslee’s speech, Republicans criticized the governor for a personal agenda that they said has failed for 10 years on critical issues, such as affordability, public safety and housing.

“You can draw a straight line from the policies of the Legislature and the governor to many of the problems we face today,” Rep. Peter Abbarno, R-Centralia, said in the Republican response to Inslee’s speech.

In December, Inslee released a $70 billion budget proposal, which invested heavily in homelessness and behavioral health services across Washington. The proposal will give legislators a guide for how to budget the state’s revenue for the next two years.

One new ask: sending a referendum to voters to increase the state’s debt limit by $4 billion, which would be invested in new housing and behavioral health services. In his speech, Inslee said the referendum will “fast-forward our ability to build” at the scale and speed the state needs.

Until the state fixes its housing crisis, thousands of people will remain homeless, Inslee said.

Republicans have mixed feelings about the governor’s proposed referendum.

House Minority Leader J.T. Wilcox, R-Yelm, said he is interested in hearing more about it, but he doesn’t know whether he or others in his caucus will support it.

Senate Minority Leader John Braun, R-Centralia, said he doesn’t think the proposal will work to fix the problem of building enough housing quickly, but said he wants to remain open-minded to all housing solutions.

“Just based on math, the proposal doesn’t work,” he said.

One housing proposal that already has bipartisan support in the House would make it legal to build fourplexes on any residential lot in cities of 6,000 or more.

Another top priority for lawmakers on both sides of the aisle this year is public safety. Inslee noted his commitment to lowering gun violence and improving mental health to help address it.

Inslee has aid he supports banning assault-style weapons and requiring permits for people who want to purchase a firearm.

“We owe our children the assurance we’re doing all we can to keep them safe,” Inslee said.

In his speech, Inslee also called on legislators to increase investments in nurses, counselors, psychologists and social workers, as well as funding for special education.

There were a number of proposals on which Republicans said they will work with Inslee and Democrats to get through this year, such as creating more law enforcement training centers, increasing funding for education, supporting the 9-8-8 crisis line for behavioral health emergencies and finding a solution to the state’s drug policy.

But there were a number of other issues that don’t have their support.

Inslee talked about the importance of protecting the right to an abortion in Washington through a constitutional amendment, which received a standing ovation from Democrats and no applause from Republicans.

A constitutional amendment would require approval from two-thirds of both the Senate and the House, which would require some support from Republicans.

Braun said he doesn’t know if there are the votes to pass it in his caucus, but that he doesn’t see a need for a constitutional amendment, given that voters approved legalizing abortion in Washington in 1970.

“The people have spoken, and we’re going to respect the will of the people,” Braun said.